OUR OFFICES ARE CLOSED FROM 6 TO 21 AUGUST INCLUDED 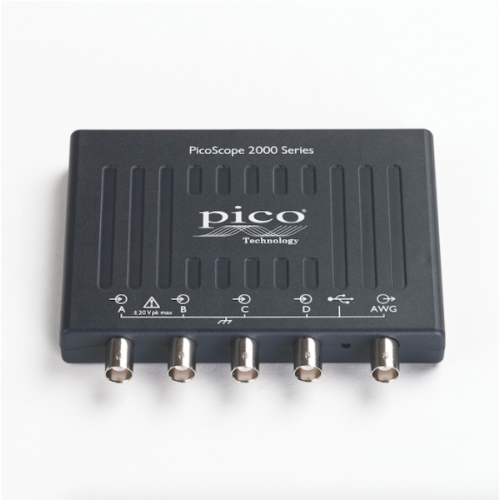 The PicoScope 2000 Series offers you a choice of 2- and 4-channel oscilloscopes, plus mixed-signal oscilloscopes (MSOs) with 2
analog + 16 digital inputs. All models feature spectrum analyzers, function generators, arbitrary waveform generators and serial bus analyzers, and the MSO models also function as logic analyzers.
The PicoScope 2000A models all deliver unbeatable value for money, with excellent waveform visualization and measurement to 25 MHz for a range of analog and digital electronic and embedded system applications. They are ideal for education, hobby and field service use.
The PicoScope 2000B models have the added benefits of deep memory (up to 128 MS), higher bandwidth (up to 100 MHz) and faster waveform update rates, giving you the performance you need to carry out advanced analysis of your waveform, including serial decoding and plotting frequency against time.

Arbitrary waveform and function generators
All PicoScope 2000 Series oscilloscopes have a built-in function generator and arbitrary waveform generator (AWG). The function generator can produce sine, square, triangle and DC level waveforms, and many more besides, while the AWG allows you to import waveforms from data files or create and modify them using the built-in graphical AWG editor.
As well as level, offset and frequency controls, advanced options allow you to sweep over a range of frequencies. Combined with the advanced spectrum mode, with options including peak hold, averaging and linear/log axes, this creates a powerful tool for testing amplifier and filter responses.

Color persistence modes
Advanced display modes allow you to see old and new data superimposed, with new data in a brighter color or shade. This makes it easy to see glitches and dropouts and to estimate their relative frequency. Choose between analog persistence, digital color and fast display modes or create your own custom rules.
The PicoScope 2000 Series’ use of hardware acceleration means that, in Fast Persistence mode, waveform update rates of up to 80 000 waveforms per second can be achieved (model-dependent), overlaying them all with color-coding or intensity-grading to show which areas are stable and which are intermittent. Faults that previously took minutes to find now appear within seconds.

High-speed data acquisition and digitizing
The supplied drivers and software development kit (SDK) allow you to both write your own software and interface to popular third-party software packages such as National Instruments LabVIEW and MathWorks MATLAB.
The drivers support data streaming, a mode that captures gap-free continuous data over the USB port directly to the PC’s RAM or hard disk at rates of up to 1 MS/s (A models) or 9.6 MS/s (B models), so you are not limited by the size of the scope’s buffer memory. Sampling rates in streaming mode are subject to PC specifications and application loading.
Beta drivers are also available for use with Raspberry Pi, BeagleBone Black, and similar ARM-powered platforms. These drivers enable you to control your PicoScope using these small, single-board Linux computers.

Serial decoding
The PicoScope 2000 Series oscilloscopes include serial decoding capability as standard. Display the decoded data in the format of your choice: as a graph, in a table, or both at once.
• Graph format shows the decoded data beneath the waveform on a common time axis, with error frames marked in red. You can zoom in on these frames to investigate noise or distortion. The data packets are broken down into their component fields, making it easier than ever to locate and identify problems signals, and each packet field is assigned a different color: in the CAN bus example below, the address is colored orange, the DLC green and the data content indigo. Color coding is available in PicoScope 6.12 or later, available for download from www.picotech.com.
• Table format shows a list of the decoded frames, including the data and all flags and identifiers. You can set up filtering conditions to display only the frames you are interested in, search for frames with specified properties, or define a start pattern to signal when the program should list the data.
It is also possible to link decoded numeric data to user-defined text strings, for ease of reading.
With the PicoScope 2000 Series, you can decode up to 15 serial protocols, including 1-Wire, CAN, I2C, I2S, LIN, SENT, SPI and UART/RS- 232, depending on the bandwidth and sampling rate of the oscilloscope model. Please see the specification table for the full list.
PicoScope also includes options to import and export the decoded data using a Microsoft Excel spreadsheet.

Serial decoding for digital signals
The PicoScope 2000 Series MSO models bring extra power to the serial decoding features. You can decode serial data on all analog and digital inputs simultaneously, giving you up to 18 channels of data with any combination of serial protocols. For example, you can decode multiple SPI, I2C, CAN bus, LIN bus and FlexRay signals all at the same time!

Waveform buffer and navigator
Ever spotted a glitch on a waveform, but by the time you’ve stopped the scope it’s gone? With PicoScope you no longer need to worry about missing glitches or other transient events. PicoScope can store the last ten thousand waveforms in its circular waveform buffer.
The buffer navigator provides an efficient way of navigating and searching through waveforms, effectively letting you turn back time. Tools such as mask limit testing can also be used to scan through each waveform in the buffer looking for mask violations.

Mask limit testing
PicoScope allows you to draw a mask around any signal with user-defined tolerances. This has been designed specifically for production and debugging environments, enabling you to compare signals. Simply capture a known good signal, draw a mask around it, and then attach the system under test. PicoScope will capture any intermittent glitches and can show a failure count and other statistics in the Measurements window.
The numerical and graphical mask editors can be used separately or in combination, allowing you to enter accurate mask specifications, modify existing masks, and import and export masks as files.

For any other questions please contact us through our main contacts