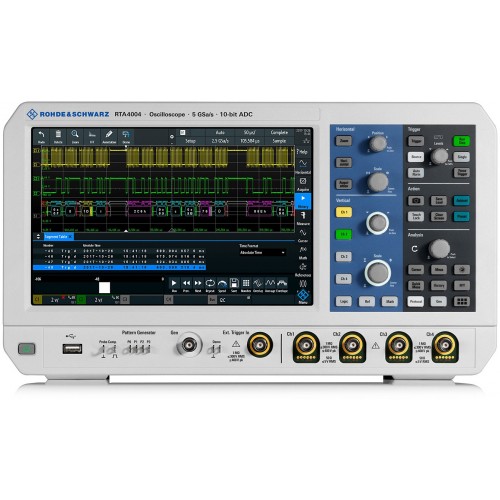 Traditionally, excellent signal integrity has been overlooked in the benchtop class of instruments because it is hard to accomplish and also expensive for instrument manufacturers. Users have had to compromise on measurement accuracy to get an affordable instrument that they could use for everyday debugging and troubleshooting tasks. With the R&S®RTA4000, signal integrity was at the forefront when we designed it.

The 10-bit A/D converter yields up to a fourfold improvement over conventional 8-bit A/D converters. The class leading low noise allows users to take advantage of this extra vertical resolution. You get sharper waveforms with signal details that would have been hidden on other oscilloscopes in this class.

Oscilloscopes in the R&S®RTA4000 class have traditionally made users choose between deep memory and fast update rates. Each of these has its place, and having to choose one or the other means you may have the wrong tool for the problem you are addressing.

The R&S®RTA4000 doesn't make you choose; it provides a fast update rate and ultra-deep memory to tackle any challenge that may come up.The R&S®RTA4000 is more than just an oscilloscope. It includes a logic analyzer, protocol analyzer, spectrum analyzer, waveform and pattern generator and digital voltmeter. A large, high-resolution capacitive touchscreen with a widely acclaimed user interface makes it easy to take ad- vantage of all these tools.


Oscilloscope
With a sampling rate of up to 5 Gsample/s and a memory depth of up to 200 Msample, the R&S®RTA4000 oscilloscope excels in its class. A waveform update rate of more than 64000 waveforms/s ensures a responsive instrument that reliably catches signal faults. Included tools provide quick results, e.g. QuickMeas, mask tests, FFT, math, cursors and automatic measurements (including statistics) 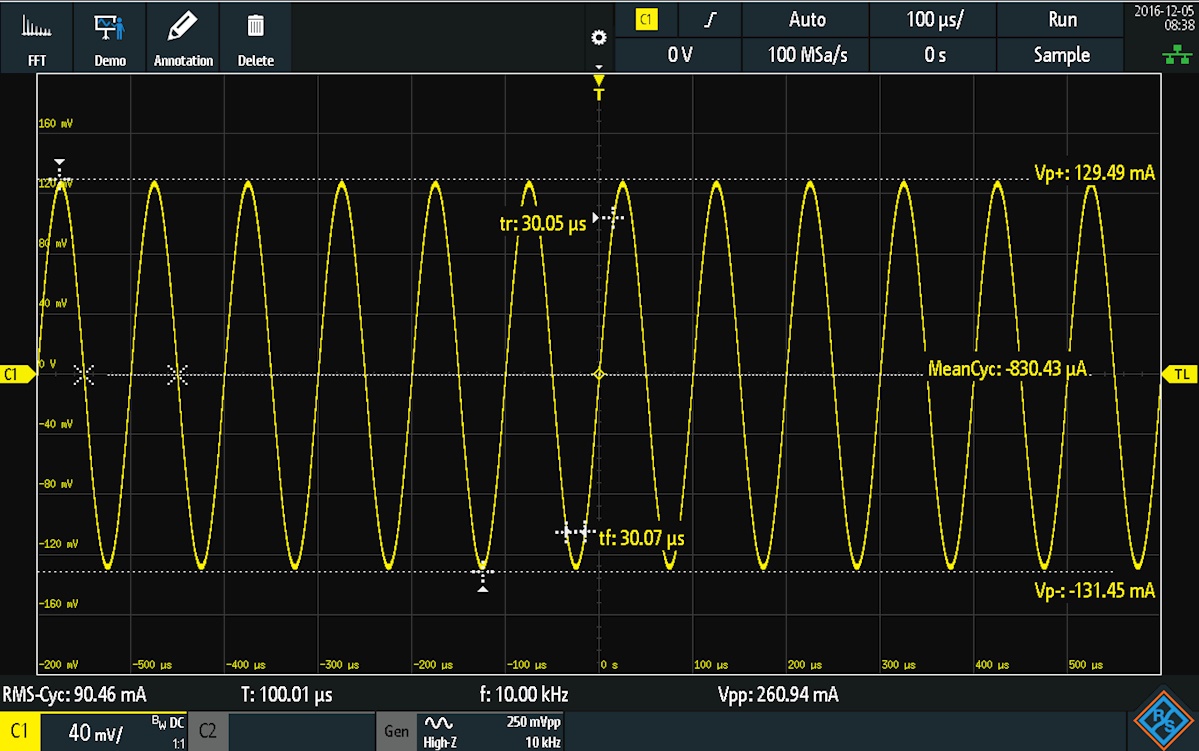 Logic analyzer
The R&S®RTA-B1 option turns every R&S®RTA$000 into an intuitive to use MSO with 16 additional digital channels. The oscilloscope captures and analyzes signals from analog and digital components of an embedded design – synchronously and time-correlated to each other. For example, the delay between input and output of an A/D converter can conveniently be determined using the cursor measurements. 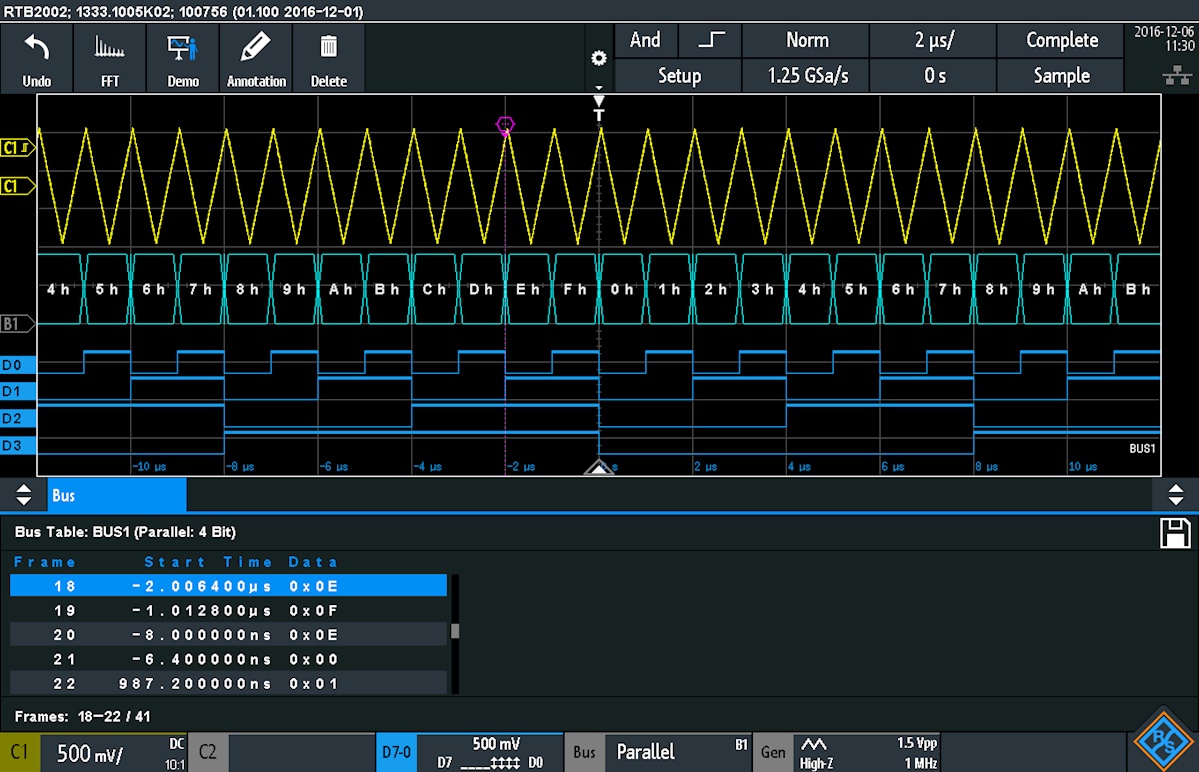 Protocol analyzer
Protocols such as I2C, SPI and CAN/LIN frequently transfer control messages between integrated circuits. The R&S®RTA4000 has versatile options for protocol-specific triggering and decoding of serial interfaces. Selective acquisition and analysis of relevant events and data is possible. With the hardware-based implementation, smooth operation and a high update rate are ensured even for long acquisitions. This is advantageous, for example, for capturing multiple packetized serial bus signals. 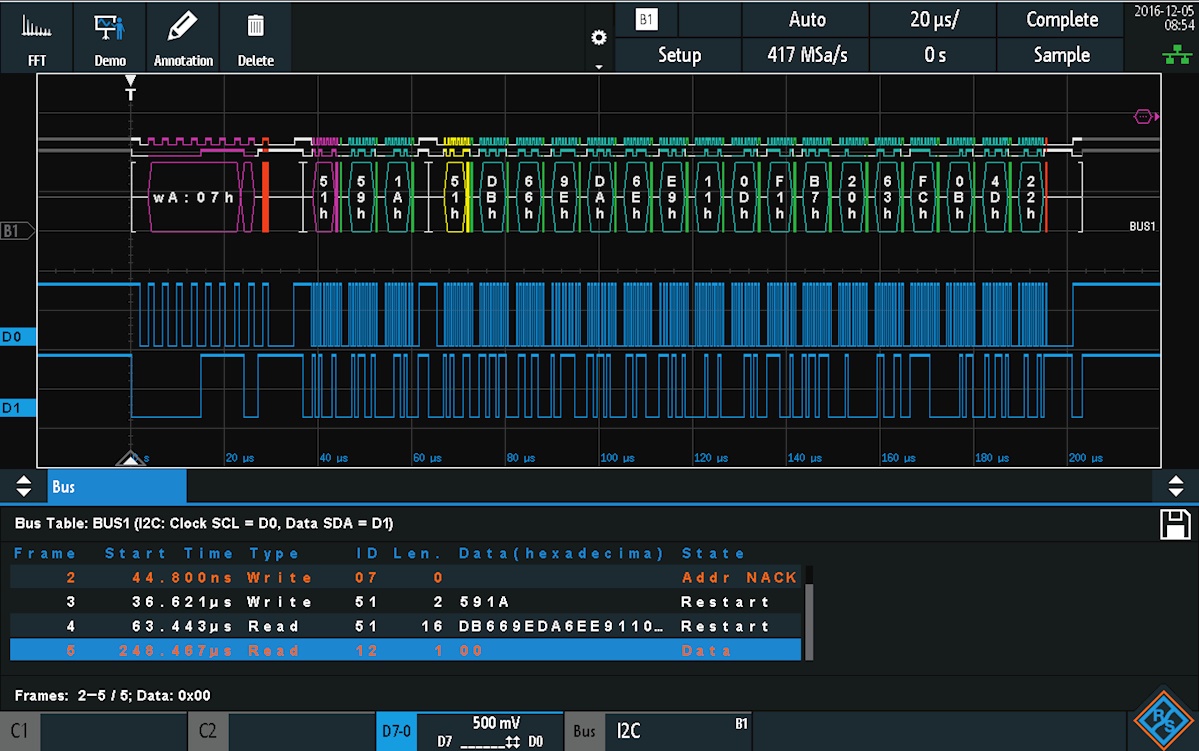 Waveform and pattern generator
The integrated R&S®RTA-B6 waveform and pattern generator (up to 50 Mbit/s) is useful for educational purposes and for implementing prototype hardware. In addition to common sine, square/pulse, ramp and noise waveforms, it outputs arbitrary waveforms and 4-bit signal patterns. Waveforms and patterns can be imported as CSV files or copied from oscilloscope waveforms. You can preview signals before playing them back to quickly check signal correctness. Predefined patterns for e.g. I2C, SPI, UART and CAN/LIN are provided. 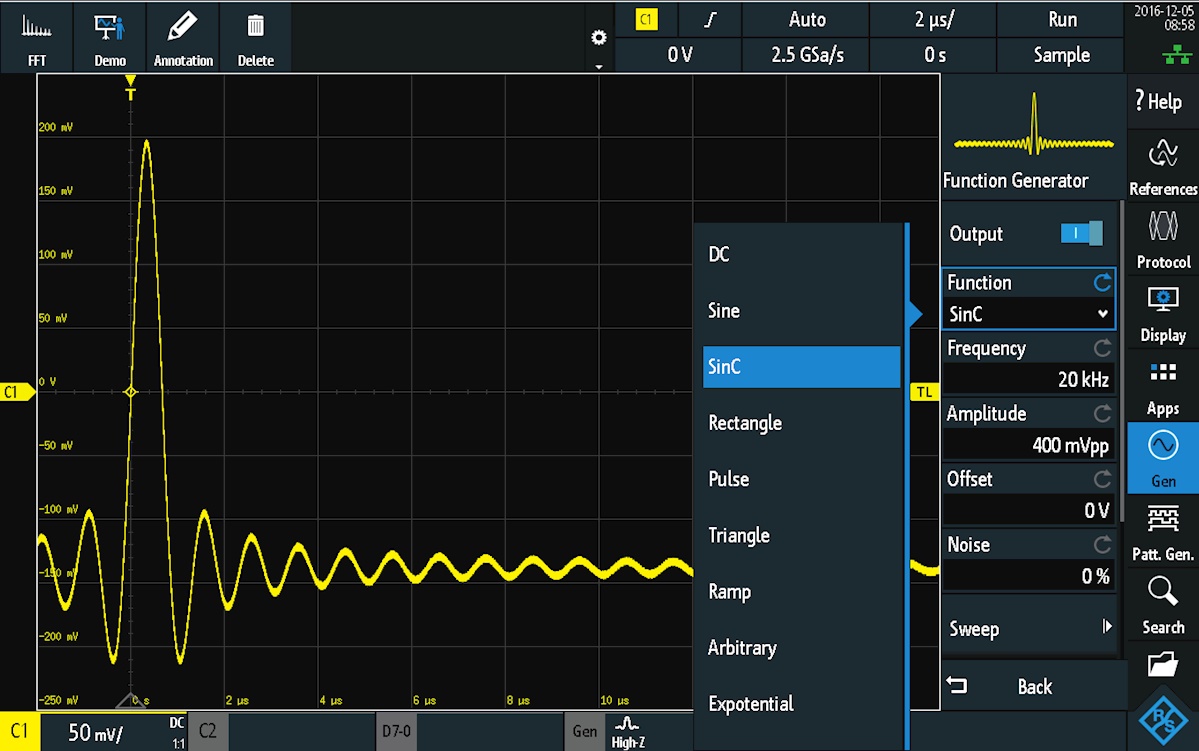 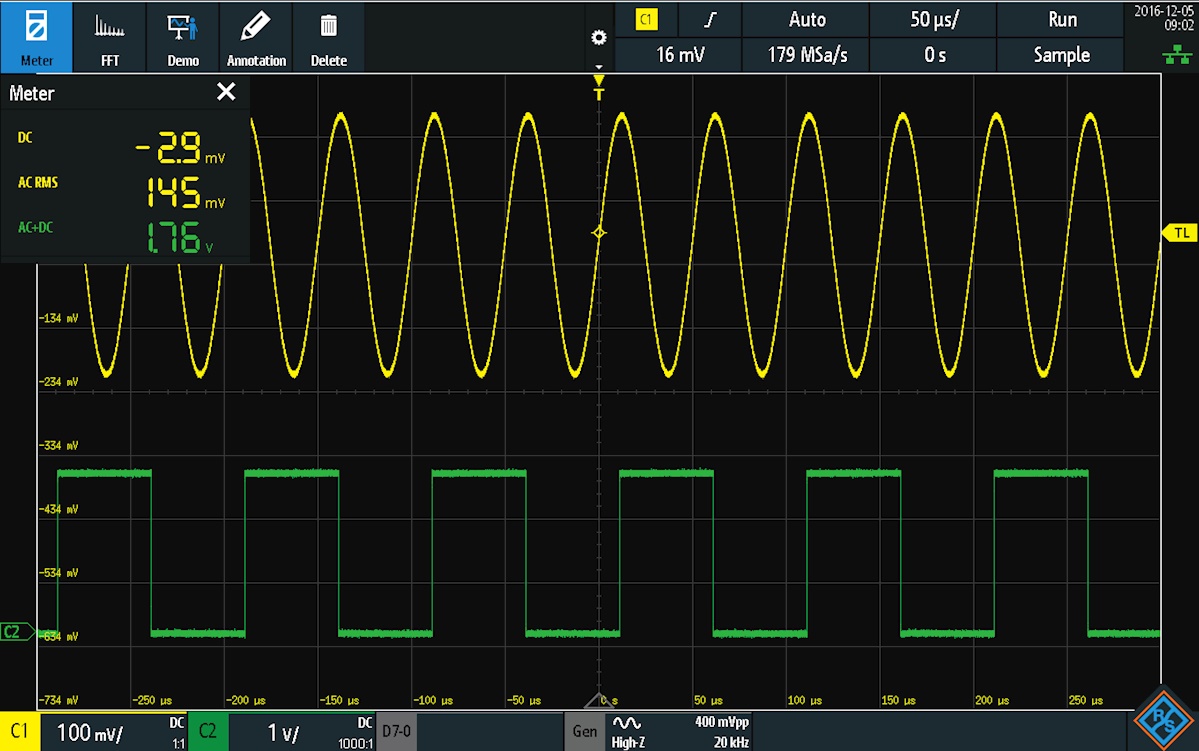 Frequency analysis mode
Difficult to find faults often result from the interaction between time and frequency signals. The FFT function of the R&S®RTA4000 is activated at the push of a button and by simply entering center frequency and span. Thanks to the R&S®RTA4000 oscilloscopes' high- performance FFT functionality, signals can be analyzed with up to 128k points. Other tools include cursor measurements and autoset in the frequency domain. 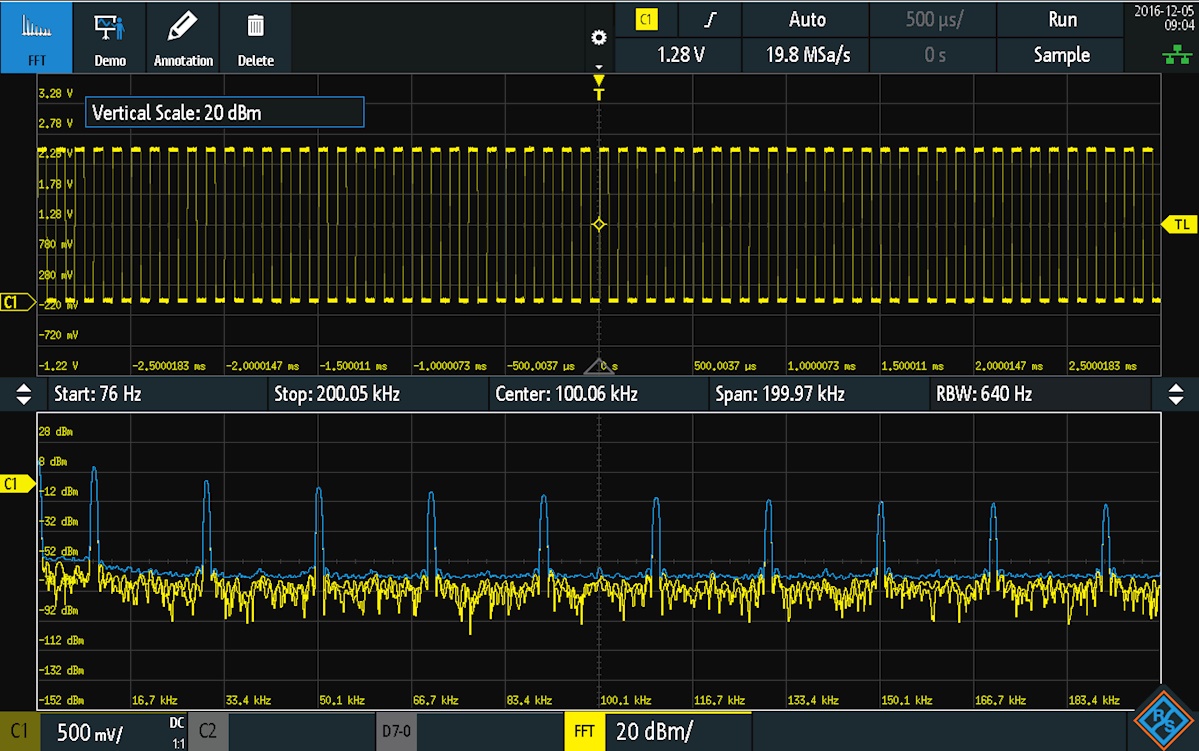 Mask test mode
Mask tests quickly reveal whether a specific signal lies within de- fined tolerance limits. Masks assess the quality and stability of a DUT based on statistical pass/fail evaluation. Signal anomalies and unexpected results are quickly identified. When the mask is violated, the measurement stops. Each violation can generate a pulse output at the AUX-OUT connector on the R&S®RTA4000. This pulse output can be used to trigger actions in the measurement setup. 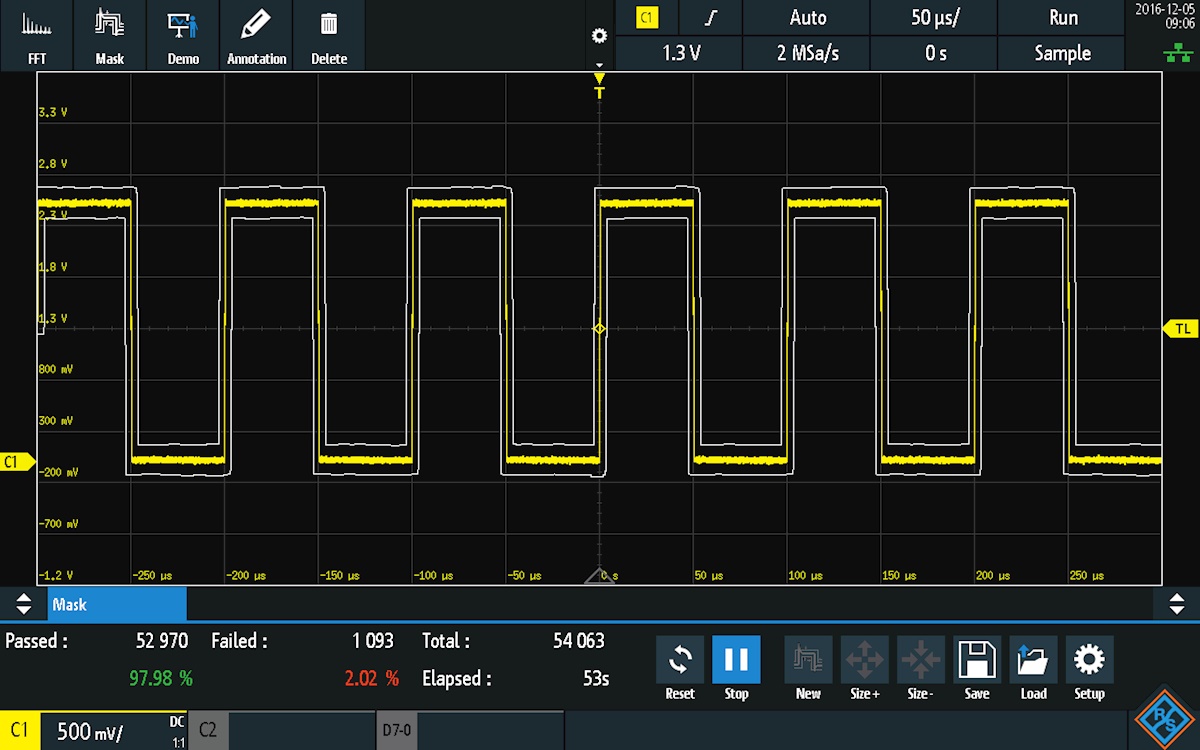 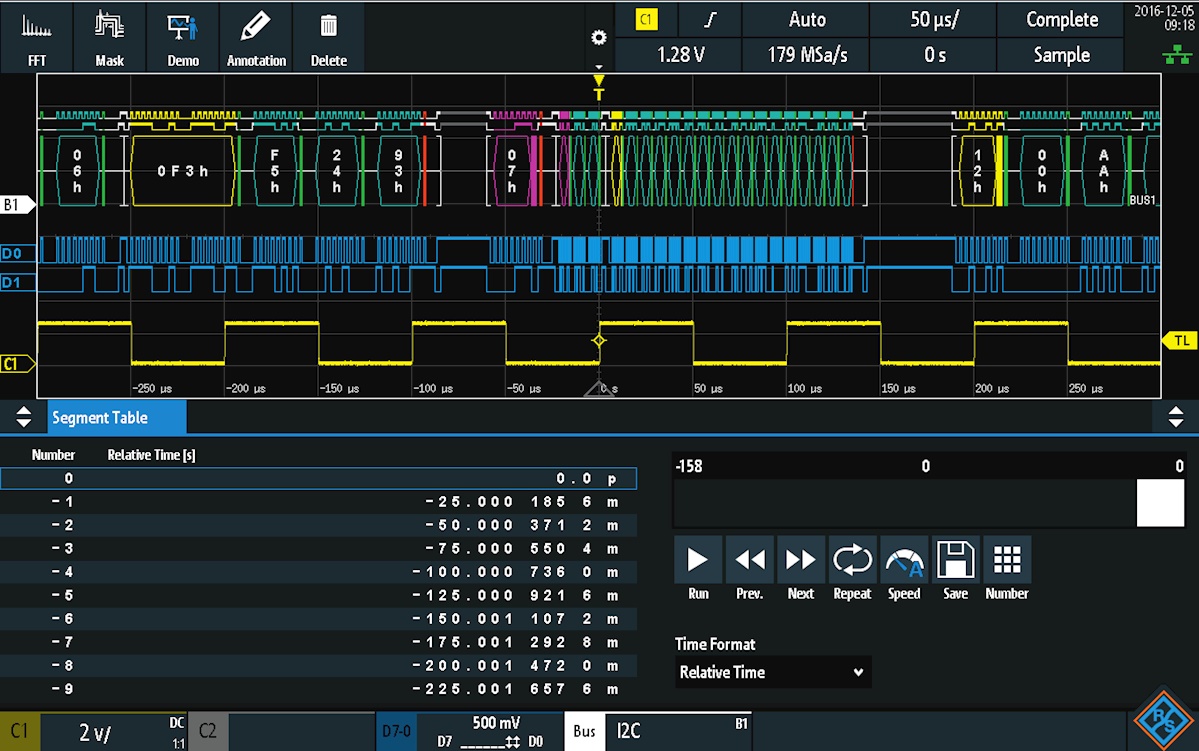 Spectrum analysis mode
Difficult to find faults often result from the interaction between time and frequency signals. The R&S®RTA-K18 spectrum analysis and spectrogram option quickly finds such errors. Like on a spectrum analyzer, parameters such as center frequency and resolution bandwidth can be adapted to the specific measurement task. The oscilloscope automatically selects the relevant time domain settings. Optimum performance ensures the fastest multi- domain analysis in this oscilloscope class. 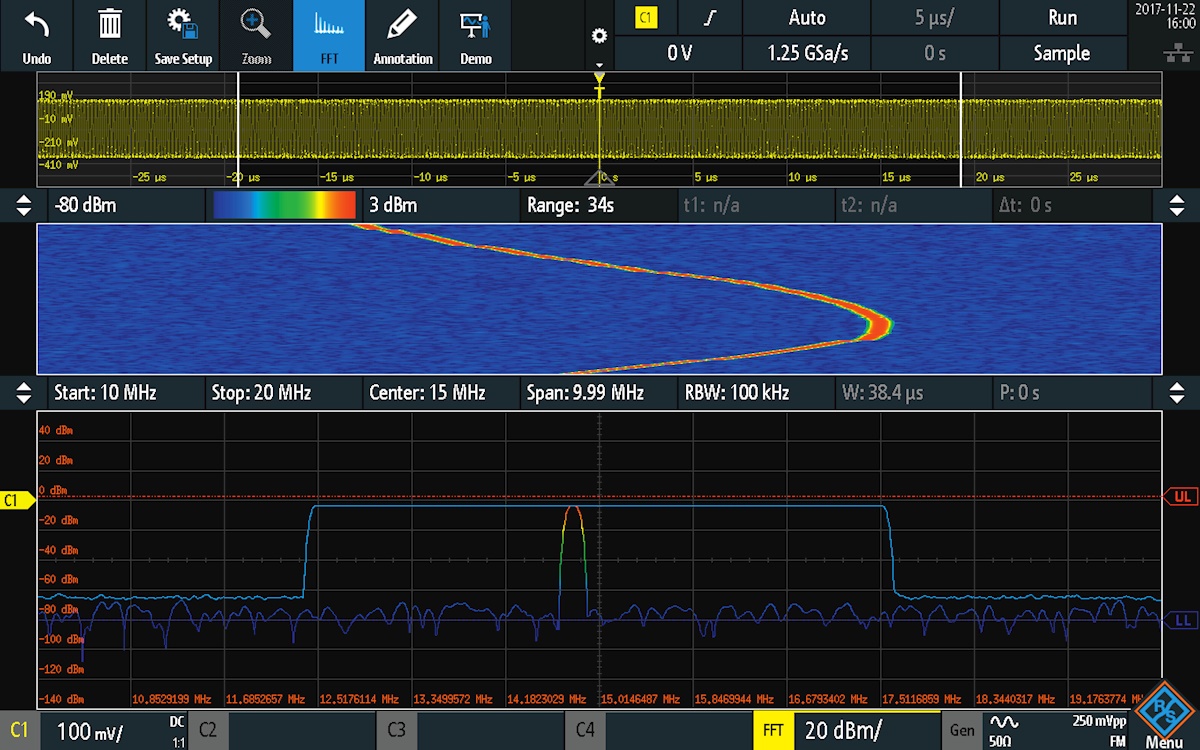 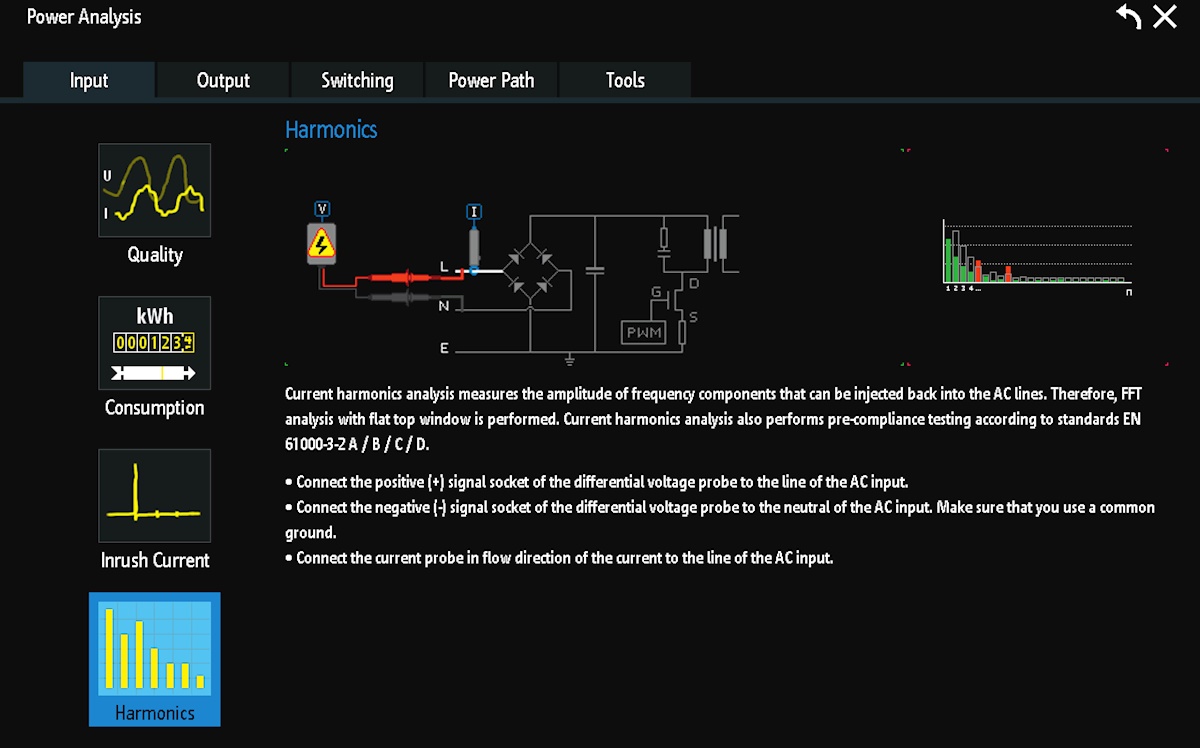