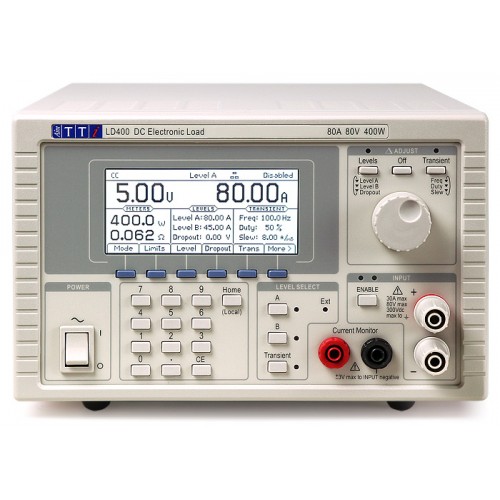 Compact electronic DC load
The LD400 is an inexpensive electronic load which is suitable for testing and characterising a wide variety of dc power sources.
It can be used to investigate the behaviour of many different types of power source such as batteries and solar cells, as well as electronic power supply units.
Its wide voltage/current range, multiple operating modes and built- in transient generator give it the versatility to offer test solutions from the design laboratory through to the component test area.
The LD400P adds full bus remote control via USB, RS-232, GPIB and LAN (Ethernet) interfaces.

600 watts intermittent power
The LD400 can operate at power levels up to 600 watts for periods of up to 1 minute.
Short term loading can be sufficient for many testing applications and significantly extends the usefulness of the LD400.

Remote control
The LD400 incorporates analogue remote control for all modes of operation. When “external voltage” is selected the level becomes linearly proportional to the voltage applied to the remote control inputs on the rear panel.
Any waveform can be used as the control voltage allowing complex load conditions to be simulated using, for example, an arbitrary waveform generator.
Alternatively, a logic signal can be used to switch between levels. When “external TTL” is selected, the level is switched between the two defined levels in response to an external logic signal.
The remote control inputs have a wide common mode range allowing the control voltage to be referenced independently of the load terminal voltages.

Current waveform monitor
It is often important to be able to observe the load current waveform on an oscilloscope. The LD400 provides a calibrated monitor output for this purpose as well as a sync output from the transient generator.
The monitor output has several volts of compliance with respect to the load input, thus allowing it to be connected to a grounded oscilloscope without current diversion.

The GPIB interface is compliant with IEEE-488.1 and IEEE-488.2. Currently GPIB remains the most widely used interface for system applications.

An RS-232/RS-423 interface is provided for use with legacy systems. This type of serial interface remains in common useage and is perfectly satisfactory for
the control of load devices because data speed is not an issue.

USB provides a simple and convenient means of
connection to a PC and is particularly appropriate for small system use. A USB driver is provided which supports Windows operating systems.

The LAN interface uses a standard 10/100 base-T Ethernet hardware connection with ICMP and TCP/ IP Protocol for connection to a Local Area Network
or direct connection to a single PC. This interface supports LXI and is highly appropriate for system use because of its scalable nature and low cost interconnection.

The LAN interface is LXI compliant.
LXI (LAN eXtensions for Instrumentation) is the next- generation, LAN-based modular architecture standard for automated test systems managed by the LXI Consortium, and is expected to become the successor
to GPIB in many systems.
For more information on LXI and how it replaces GPIB, or operates along side it, go to: www.aimtti.com/go/lxi

CONSTANT RESISTANCE MODE
Simulates a standard resistive load by providing a current drain proportional to voltage. Settings are displayed in Ohms or milli-Ohms.
Unlike  fixed resistors or rheostats, the load provides a precisely controllable resistance with high power dissipa on and high temperature stability over a wide value range.

CONSTANT POWER MODE
Simulates a load whose power con- sump on is independent of the ap- plied voltage.
This is true of many types of equipment that incorporate switch-mode regulators.
This mode may be particularly suitable for testing power sources of portable devices such as Lithium-ion batteries.