A borescope (occasionally called a boroscope, though this spelling is nonstandard) is an optical device consisting of a rigid or flexible tube with an eyepiece on one end, an objective lens on the other linked together by a relay optical system in between. The optical system in some instances is surrounded by optical fibers used for illumination of the remote object. An internal image of the illuminated object is formed by the objective lens and magnified by the eyepiece which presents it to the viewer's eye.
Rigid or flexible borescopes may be fitted with an imaging or video device. For medical use, similar instruments are called endoscopes. 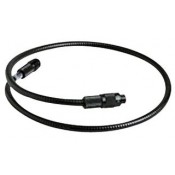