An arbitrary waveform generator (AWG) is a piece of electronic test equipment used to generate electrical waveforms. These waveforms can be either repetitive or single-shot (once only) in which case some kind of triggering source is required (internal or external). The resulting waveforms can be injected into a device under test and analyzed as they progress through it, confirming the proper operation of the device or pinpointing a fault in it.
Unlike function generators, AWGs can generate any arbitrarily defined waveshape as their output. The waveform is usually defined as a series of "waypoints" (specific voltage targets occurring at specific times along the waveform) and the AWG can either jump to those levels or use any of several methods to interpolate between those levels.
For example, a 50% duty cycle square wave is easily obtained by defining just two points: At t0, set the output voltage to 100% and at t50%, set the output voltage back to 0. Set the AWG to jump (not interpolate) between these values and the result is the desired square wave. By comparison, a triangle wave could be produced from the same data simply by setting the AWG to linearly interpolate between these two points.
Because AWGs synthesize the waveforms using digital signal processing techniques, their maximum frequency is usually limited to no more than a few gigahertz. The output connector from the device is usually a BNC connector and requires a 50 or 75 ohm termination.
The main parameters to select the suitable AWG are:
- bandwidth (Hz)
- number of channels (1 or more)
- buffer memory (pts)
- sampling rate (Sa/sec)
- output signal amplitude (Vpp)
- vertical resolution (bit)
Batter Fly offers a wide variety of models from 1 to 4 channels up to 500MHz.
AWGs can operate stand alone or into an autometed test system, programming manuals are available free of charge. 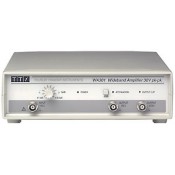 Frequency from 0 to 25MHz Keysight 33210A - Function/Arbitrary Waveform Generator, 10 MHz The most affordable model for basic..