Simple soldering irons reach a temperature determined by thermal equilibrium, dependent upon power input and cooling by the environment and the materials it comes into contact with. The iron temperature will drop when in contact with a large mass of metal such as a chassis; a small iron will lose too much temperature to solder a large connection. More advanced irons for use in electronics have a mechanism with a temperature sensor and method of temperature control to keep the tip temperature steady; more power is available if a connection is large. Temperature-controlled irons may be free-standing, or may comprise a head with heating element and tip, controlled by a base called a soldering station, with control circuitry and temperature adjustment and sometimes display.
A variety of means are used to control temperature. The simplest of these is a variable power control, much like a light dimmer, which changes the equilibrium temperature of the iron without automatically measuring or regulating the temperature. Another type of system uses a thermostat, often inside the iron's tip, which automatically switches power on and off to the element. A thermal sensor such as a thermocouple may be used in conjunction with circuitry to monitor the temperature of the tip and adjust power delivered to the heating element to maintain a desired temperature.
Another approach is to use magnetized soldering tips which lose their magnetic properties at a specific temperature, the Curie point. As long as the tip is magnetic, it closes a switch to supply power to the heating element. When it exceeds the design temperature it opens the contacts, cooling until the temperature drops enough to restore magnetisation. More complex Curie-point irons circulate a high-frequency AC current through the tip, using magnetic physics to direct heating only where the surface of the tip drops below the Curie point.
A soldering station, invariably temperature-controlled, consists of an electrical power supply, control circuitry with provision for user adjustment of temperature and display, and a soldering iron or soldering head with a tip temperature sensor. The station will normally have a stand for the hot iron when not in use, and a wet sponge for cleaning. It is most commonly used for soldering electronic components. Other functions may be combined; for example a rework station, mainly for surface-mount components may have a hot air gun, vacuum pickup tool, and a soldering head; a desoldering station will have a desoldering head with vacuum pump for desoldering through-hole components, and a soldering iron head.
Rework (or re-work) is the term for the refinishing operation or repair of an electronic printed circuit board (PCB) assembly, usually involving desoldering and re-soldering of surface-mounted electronic components (SMD). Mass processing techniques are not applicable to single device repair or replacement, and specialized manual techniques by expert personnel using appropriate equipment are required to replace defective components; area array packages such as ball grid array (BGA) devices particularly require expertise and appropriate tools. A hot air gun or hot air station is used to heat devices and melt solder, and specialised tools are used to pick up and position often tiny components.
A rework station is a place to do this work - the tools and supplies for this work, typically on a workbench. 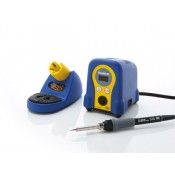 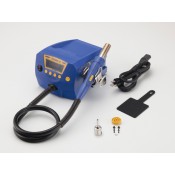 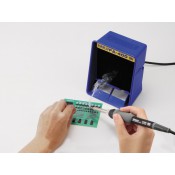 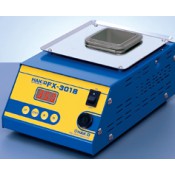 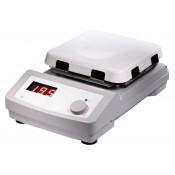 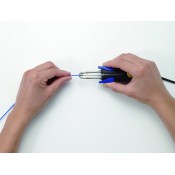 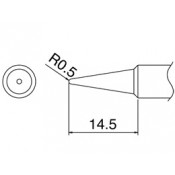 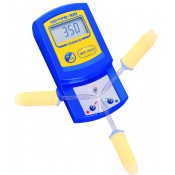 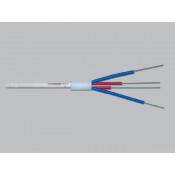 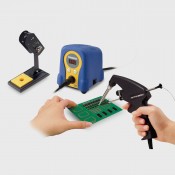